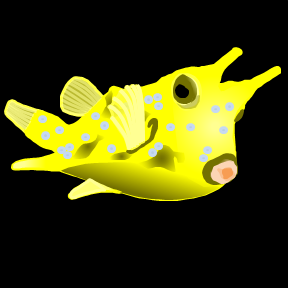 Welcome to the Cowfish Blog! You may have heard of a cowfish before, or maybe not, but two things are certain- cowfish are REAL and they look strange compared to most fish. I figured I would introduce my mascot in this first post, and in doing so tell you a little bit about this blog, and science in general. So first, let me introduce my guest of honor, the cowfish.

You may notice a couple of things about the cowfish that stand out as strange. It is shaped like a box. That boxy shape is made of bone, which makes the cowfish much larger than would be necessary to simply contain its innards. This makes the cowfish, which tops out at about 20 inches in length, one of the largest fish around on the coral reefs, where it makes its home. That is excluding the sharks. And the groupers. In any case, it is large, which means it is noticeable if you go snorkeling in the Indopacific, especially because it is bright yellow. Its coloration makes it stand out to tourists, and also to predators. The cowfish doesn’t have to worry about standing out to predators because it has a couple of ways to defend itself. First, it has horns. These horns make it too large to fit in the mouths of most fish, which means only very large predators can hope to make a meal of a cowfish. Second, it is toxic. When a cowfish feels threatened it secrets poison from its skin, and this poison is very dangerous to other fish. This means that a shark that bites down on a cowfish might seriously regret the meal. Cowfish poisoning will first cause disorientation and erratic movements, then coma, then death. It is even toxic to mammals, though it takes a lot of toxin to affect humans. Cowfish toxin can have an indirect effect on humans that keep fish in aquaria, and have a sick cowfish kill an entire tank of fish in a night. Speaking from experience, of course.

I think most people would agree that a cowfish looks like a very slow swimmer. In fact, cowfish are fairly fast swimmers that can swim long distances using little energy and with great stability. They swim using movements from their fins only, since they can’t bend their bodies. At slow speeds the tail is used for steering, like a rudder. Their body shape can automatically correct any tips and dips that happen when waves sweep over the coral reefs on which they live. That is because all of the edges of a cowfish’s boxy frame stick out in a flat plate similar to the keel of a boat. Boat keels are designed to keep the ship stable in the water and to help prevent it from tipping over, and a cowfish keel works the same way. In addition to providing stability, all of the protrusions on the cowfish’s body interrupt water flow from pretty much any direction and push the water away from the cowfish, making for a smooth ride. This is similar to what happens to a delta wing aircraft in flight. Delta wing aircraft are designed for maneuverability, and so, it seems, are cowfish. Cowfish can turn on a dime and swim upside down, which are adaptations that allow them to explore all of the hiding places in a coral reef. As I mentioned, cowfish are also extremely enregy efficient swimmers. Boxfish (a relative of the cowfish) use about as much energy while swimming as a sockeye salmon, a fish built for traveling long distances. In fact, cowfish swimming is more efficient (at pretty much all speeds) than the smallmouth buffalo fish, a carp that lives in the Mississippi River and has a much more typical fish shape.

The cowfish body design is so efficient that engineers often turn to the cowfish for inspiration. One application of the cowfish body shape could be a more energy-efficient design for a stable underwater vehicle. DaimlerChrysler AG actually designed a concept car based on the body shape of the cowfish and its relatives. This car, called the Mercedes-Benz Bionic, was introduced as a highly energy-efficient vehicle in 2005. It can go from 0-60 mph in 8 seconds, which is 0.1 seconds LESS than the Jaguar S Type 2.7d V6 Sport introduced in 2004. Clearly there is a lot that can be learned from the cowfish.

One thing we often don’t think about (or maybe you do, in which case you MAY be a biologist) is how did the cowfish get this way? Over evolutionary time (we are talking hundreds of millions of years) fish are exposed to different pressures that they must be able to survive in order to persist as a species. These include predators, finding food, finding mates, and a variety of other things. So which of these pressures caused the cowfish to look the way it does, and why did it respond to these pressures differently from every other fish? Certainly other fish can avoid predators by hiding or using camouflage, and it seems like the cowfish sure wastes a lot of energy developing its bony armor and toxins when it could have just covered itself in camo. There are plenty of other fish on the reef that are masters of maneuverability, such as the wrasse, and these fish don’t have to build up a boxy shape to accomplish amazing feats of hydrodynamics. So what caused the cowfish’s ancestors to develop its unique shape, horns, and toxins? Perhaps we will never know, but we can imagine that the route from a normal fish-shape to the shape of my most recent Amazon delivery was probably not a direct one. If it was, we would likely see it a lot more often in the animal world. I, for one, am glad that the cowfish’s ancestors took such a circuitous route to become the unique species it is today, not only because I appreciate cowfish for their adorable appearance, but also because I look forward to the day when I can travel underwater in a submarine built like a cowfish. Which may or may not be yellow. But I really hope it is yellow.

This leads me to the reason for naming my blog after the cowfish. The cowfish embodies many of the reasons why I love science. Science is weird and full of questions. You can spend your entire life as a scientist asking and attempting to answer questions. However the answers, when you do get them, are usually not direct, much like the evolution of the cowfish. As a result the quest for answers is a journey that leads the scientist to strange and interesting places. The end is something you probably never expected, but it is also immensely more interesting than you expected. I love that about science, and I love that about the cowfish. So stay tuned for some more not-so-streamlined science- my experiences as a marine scientist, and interesting tidbits about science and the natural world.