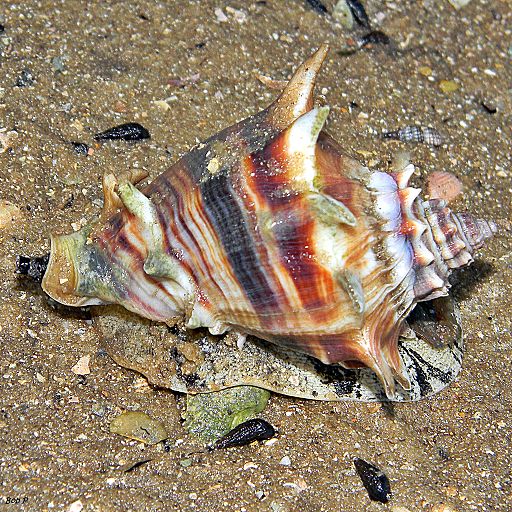 Have you ever lifted a shell to your ear to hear the ocean? While it is nice to think that each shell is bringing memories of the ocean with it, what you are actually hearing is ambient sound from your environment bouncing off the surfaces of the inside of the shell. The noises are mixed together and amplified, and the result is a sound that reminds us of a wave.

While the ocean-in-a-shell is just a myth, the truth about sound in the ocean is far more amazing. Sound waves are pressure waves, and as the density of the substance they are moving through increases, the speed of the sound increases. Since water is denser than air, sound can move much faster in water than in air. That means sound is an excellent way to communicate over long distances in the ocean, and many animals have taken advantage of sound as a means to send messages.

Whales and dolphins are some of the first animals we think of when it comes to communication in the ocean. Noises made by large whales are the loudest produced by any living animal. In fact, certain low-frequency whale calls can be transmitted across an entire ocean basin. The ability to produce noise that can travel so far is very helpful in the ocean, where whales must find each other despite being separated by large distances.

Large marine mammals are not the only ocean animals that use sound. Environments with a lot of activity, such as oyster reefs, are loud. Snapping shrimp and a variety of sounds produced by feeding animals can increase sound by as much as 30 decibels over an oyster reef. That is about the same amount of sound as an average human residence (ex. the intensity of “inside voices”). These reef noises may provide a cue for drifting oyster larvae that this would be a good place to settle (see Lillis et al. 2014). Other animals use cues from their environments to avoid areas that are dangerous. Crabs can detect sound and will stop feeding when researchers play noises generated by large predators (see Hughes et al. 2014). Scientists are just starting to understand all of the ways that animals use sound to transmit and receive information.

Humans also use ocean sound to transmit and collect information. Acoustic tags are used to track movements of endangered species, such as the great white shark. These tags produce pinging noises that are picked up by receivers as the shark swims past. Receivers are often anchored at the entrances to bays and across the shallows of the ocean, but they may also be anchored or free-drifting in the open ocean. When a ping is picked up, the noise lets researchers know a shark is nearby, and specific characteristics of the noise let them know which shark it is. Through the movement of individuals we can start to understand migration patterns, behavior, and even which groups of sharks may be related to each other, based on where they go to breed. This is important to understand so we can protect the areas of the world that are most commonly used by these threatened animals, so they are still around for future generations.

In addition to understanding behavior, acoustic tags can help scientists and ocean resource managers learn if a marine protected area actually protects the animals it is designed to protect. Marine protected areas are areas where fishing and other human activities that remove or destroy marine life are prevented. These areas often support large numbers of fish that can then spill over into areas where fishing is allowed and support the livelihoods of fishermen in a sustainable manner. These areas are only effective if they protect fish long enough for them to breed and grow the population. We can track specific fish to see if they are using the areas that are protected from fishing, and how long they stay there (see Garcia et al. 2014). Depending on what we find out about fish movements, we can change the shape and size of the protected area to make it more effective.

Larger sound receivers, called hydrophones, can be used to pick up extremely loud noises, such as earthquakes. A sea-floor earthquake in 2004 caused most of the continental shelf off Sumatra to tumble into the ocean depths and resulted in a series of tsunamis that devastated coastal communities in the Indian Ocean. The sound of the earthquake (see below) was picked up by many hydrophones in the Indian Ocean, even thousands of kilometers away. Sounds from category 4 earthquakes are regularly heard across an entire ocean basin!

At certain depths sounds can travel across an entire ocean. The aptly named SOFAR channel is a depth at which sound waves, once they reach it, tend to stay and travel across entire ocean basins without losing much intensity. We put most of our hydrophones in this region so we can pick up the maximum number of sounds generated in the ocean.

Hydrophones are collecting sound signals all of the time, and sometimes they pick up very strange things. These noises are named and researchers try to determine what caused them. You can see some of the explained and unexplained noises here. As much as we would like them to be caused by some huge sea creature, often they are the result of glacial activity. For instance, take “The Bloop”. This noise was recorded in 1997 and was unexplained until very recently. People now believe it is the sound of a glacier breaking in half, because we have recordings of comparable, explainable glacial noise from the Southern Ocean. Listen to “The Bloop” here– it is not hard to understand how many thought that this was the noise of some sea creature.

This post is only the tip of the iceberg (pun intended) of all of the ways sound is used in the ocean. However, even this handful of examples is enough to develop an understanding of how important sound is in the marine realm. The idea that animals other than whales and dolphins can use sound to transmit information is fairly new, and we call it “soundscape ecology”. Soundscape ecology is bound to provide some unique insights into how animals collect information in an environment as vast and unpredictable as the ocean.