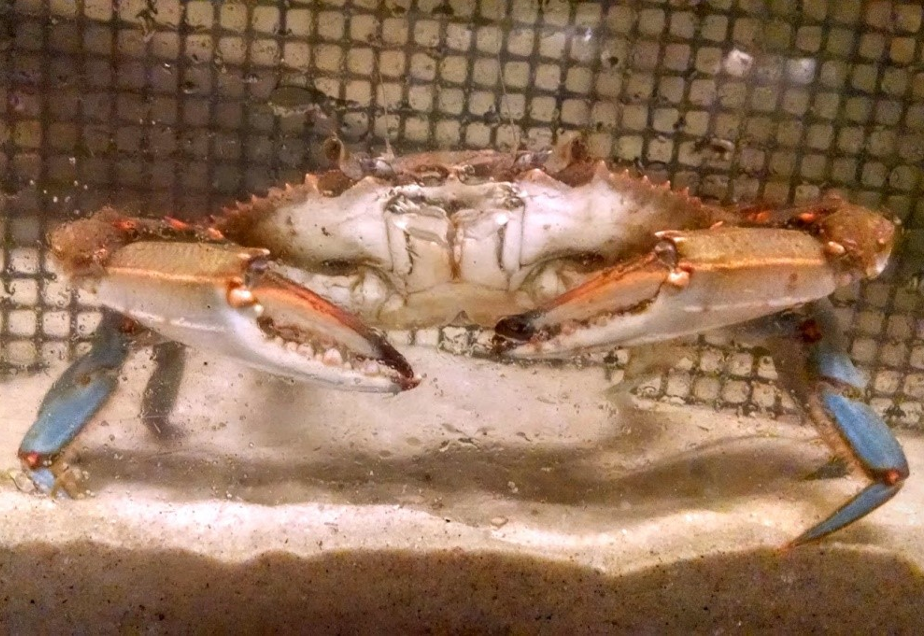 Welcome to my acidification laboratory!

Today a paper on acidification in blue crabs and soft-shell clams, written by myself, my intern, and my PhD advisor, was published, so I thought I’d celebrate by sharing the lab setup we used.

We added only enough CO2 to maintain the pH of the water at 7.2, which is about 4 times more acidic than today’s pH in the York River (a tributary of Chesapeake Bay). pH was controlled using a pH meter paired with a solenoid valve. This valve only opened to let CO2 in the tank when pH increased above 7.2.

Juvenile soft-shell clams were either acidified or held in non-acidified tanks (as a control) for 30 days.  After this period of time, acidified clams had lighter shells than clams held under the control. This is likely because it is harder to build shell in acidified water, which tends to dissolved calcified matter like shell material.

After 30 days, clams were placed in sand and we tested their ability to avoid detection by predators by moving a probe slowly towards the clam, and seeing when the clam would exhibit “hiding” behavior. The behavior we were looking for was retraction of the siphon, which is the fleshy opening at the top of the clam that draws in water for feeding and respiration. Acidified clams allowed the probe (simulating the approach of a predator) to get closer before hiding than non-acidified clams. This may indicate that soft-shell clams will be less successful avoiding predation when they are exposed to acidification.

Finally, clams were exposed to real predation by blue crabs. Crabs were held in acidified or control tanks for 48 h before feeding trials to acclimate them to reduced pH conditions. Then they were allowed to feed on 4 soft-shell clams (which were allowed to burrow in sand) for 48 hours. After the trial was over, we searched for any remaining clams and calculated clam mortality.

In normal conditions, if a crab detects there is food available, it is typical for that crab to continue searching until all clams are found. Alternatively, another example of normal behavior is for crabs to fail to detect any prey, forego foraging entirely, and laze about for 48 hours, leaving all clams alive. What is not normal is for a crab to consume a portion of clams, and then stop searching. This abnormal behavior never happened for non-acidified crabs, but over half of the acidified crabs ate only a portion of the prey. Furthermore, crabs found at least one clam in all of the acidified trials, possibly because clams are not that good at hiding when they are in acidified water.

Compared to non-acidified crabs, crabs in acidified trials had higher encounter
rates, which also supports the conclusion that acidified clams are bad at hiding. However, acidified crabs also had lower search time, which means they spent less time foraging, even though they were able to detect prey.

It is unclear why this may be happening to acidified crabs, but one thing is clear: acidification has interesting and unexpected consequences for interacting species. An understanding of the indirect impacts
of acidification mediated by predator-prey interactions is necessary to
make viable predictions and take conservation actions that may preserve these species.