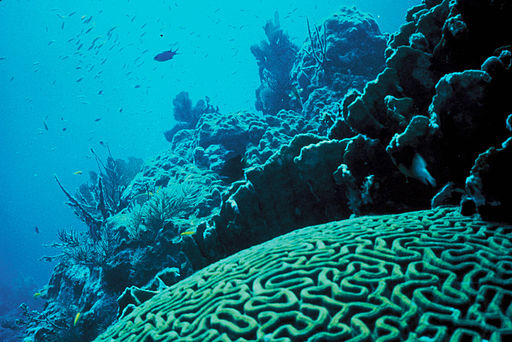 The Great Barrier Reef is arguably the largest living organism in the world. Arguably, because it is actually made up of billions of tiny organisms, that are themselves part animal, part plant, and part mineral. Coral polyps, the base unit of a coral reef, are colonial animals that look like teeny tiny anemones. Inside their skin they have algae that help them by making some extra food from sunlight. These algae are called xoozanthellae. The coral also secret a hard calcium carbonate skeleton, which (for hard corals at least) forms the base of the colony and helps the coral grow. Over thousands of year (8,000 to be exact) these tiny creatures have built a structure that can be seen from space. I have dreamed of seeing the reef ever since I was a child, and am so excited I got to dive on the reef as part of the first few weeks of my 10-week stay in Australia.

After all of the time I have spent sitting in marine biology classes, I am well aware of all of the problems facing the Great Barrier Reef, including disease, pollution, and climate change, which causes the corals to lose their friendly algae, causing the corals to turn white, or “bleach”. However, after talking to some scientists at the Australian Institute of Marine Science this week, I have learned about another threat to coral reefs- starfish. A particular species of starfish, the crown of thorns starfish, is a very efficient predator of coral. In addition, it has a rather nasty habit of popping up every couple of decades in epidemic proportions. Nobody quite knows why, but it seems every 10 or so years the starfish show signs of increasing in numbers, and then are found everywhere on the reef, consuming coral and sending the Australian tourism business into episodes of head-hanging and hand-wringing anxiety.

What can be done? Some scientists are focusing on understanding what causes the starfish to reach epidemic proportions, so they can reverse or at least prevent outbreaks. One leading hypothesis is that pollution from land, especially extra nutrients, causes more young crown of thorns starfish to survive to adulthood, because there is more food for them. However, other scientists believe that crown of thorns outbreaks are simply natural phenonmenon that are caused by a slight change in water flow around the reef, which keeps more young starfish on the reef, instead of flushing them out to sea. Other researchers are focusing on an immediate fix for the crown of thorns starfish problem. They focus on developing a way to kill crown of thorns on the reef, and they have developed a lethal injection that will kill the starfish, but this method is expensive and would require a lot of man power. Other researchers are looking for deterrants or even attractants so we can keep starfish out of some areas or trap and remove them in large numbers. The trouble is that they will have to find an attractant/deterrant that works only for the crown of thorns, and not on any other starfish, because we are still concerned about keeping the other starfish that do not destroy the reefs healthy.

If this is likely a natural phenomenon, why should we care? While reefs may be able to bounce back from an outbreak of crown of thorns starfish, it is also just as likely that the other problems that plague the reef, including pollution, climate change, and other natural phenomena like storm events, may make it too difficult for coral to repopulate the reef. Certain coral species, and even certain reefs, may be lost.

So how likely is it that crown of thorns starfish will eat the Great Barrier Reef? The best coral reef scientists believe that the crown of thorns starfish numbers are increasing, and the last time this happened there was a severe outbreak within a few years, so many people are very concerned. I, for one, am glad I made it out to see the reef this year, and not a couple of years from now. The reefscape may look very different in just a few short years.

One Reply to “Great Barrier Reef in a Prickly Predicament”